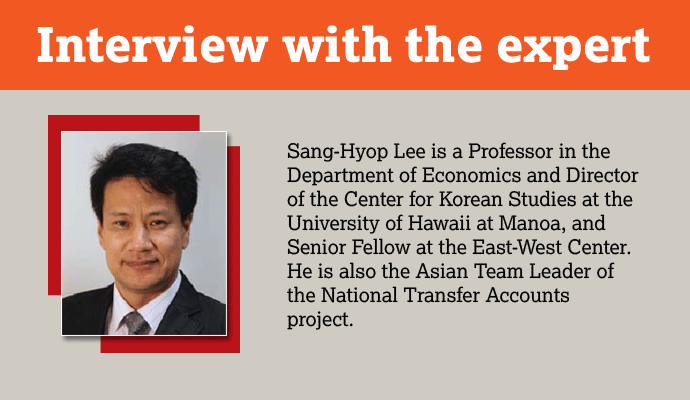 What are ‘National Transfer Accounts’ and what is their key concept?
The economic life cycle is characterised by three distinct phases: two phases of economic dependence and one phase of economic independence. In most societies, children consume resources generated by adults, transferred to them by their family or by the public sector. The elderly, in turn, possess an accumulation of assets accrued during their active economic phase, and of resources produced and transferred by adults. NTA provides a complete accounting by age and gender of how economic resources are produced and consumed and how each country relies on government programmes, family systems, and financial markets to achieve the final distribution of economic resources among users and groups in each year. Research teams in more than 60 countries are constructing accounts which are designed to complement the UN System of National Accounts, population data, and other important economic and demographic indicators.

What do National Transfer Accounts tell us about population ageing in Asia-Pacific?
Changes in age structure are occurring all over the world. Many countries in Asia-Pacific, in particular, are experiencing demographic transition at an unprecedented speed. NTA tell us about several important characteristics of Asia-Pacific. Rapid fertility decline increased the proportion of workers in the population, which accelerated rapid growth in per capita income. Countries in East Asia were particularly successful in realising large demographic dividends, in part, because their fertility decline was so rapid. However, many Asian countries are beginning to experience rapid population ageing. Because of this, there are increasing concerns about slow economic growth, fiscal problems and poverty of the elderly in the region.

What are the advantages and benefits of using NTA data in designing policies, especially policies on ageing?
The NTA project is shedding light on many areas of importance to policymakers. Economic growth is one aspect. The first demographic dividend occurred in many Asian countries because of the effect of fertility decline on the number of dependent children. However, slow economic growth could happen due to a large dependent old-age population or low saving rates. Fiscal problems are another concern because tax revenues may not keep pace with entitlement programmes such as public pensions and publicly-funded health care. Limited participation of older people in the labour market makes them particularly vulnerable to poverty, lacking access to health care, and exposed to other risks. The adverse consequences of population ageing can be offset, however, by government policies. For example, if workers increase their savings to cover a longer life expectancy, or if the quantity-quality tradeoff leads to more investment in human capital and higher productivity, the adverse effect could be dampened.

Are there any good examples of governments using NTA in responding to challenges in its country?
Thailand is a good example. The Office of the National Economic and Social Development Board (NESDB) have used it in their national economic planning. South Korea is planning to make the NTA national statistics public so that policy makers as well as researchers can use the official data in responding to challenges in its country. Researchers and government officials are actually using NTA profiles for their projections and planning although they do not quote them.

For CSOs/NGOs working on ageing issues, how can knowledge of NTA support to their advocacy work?
It is important to emphasise the close link between NTA and development objectives for advocacy work which means that NTA data can be directly linked to development objectives. This could involve estimate flows separately by gender and income class or it could involve incorporating other age-specific measures or aggregate measures into the NTA database. In this regard, at least the first five Sustainable Development Goals (SDGs) are clearly related to NTA data; eradicating poverty, no hunger, good health and wellbeing, quality of education, and gender inequality. NTA can help develop new measures that are useful for achieving development goals for benchmarking, such as the performance of other countries in similar circumstances. This could be something as simple as public and private spending on education or consumption of the elderly compared to prime-age adults.