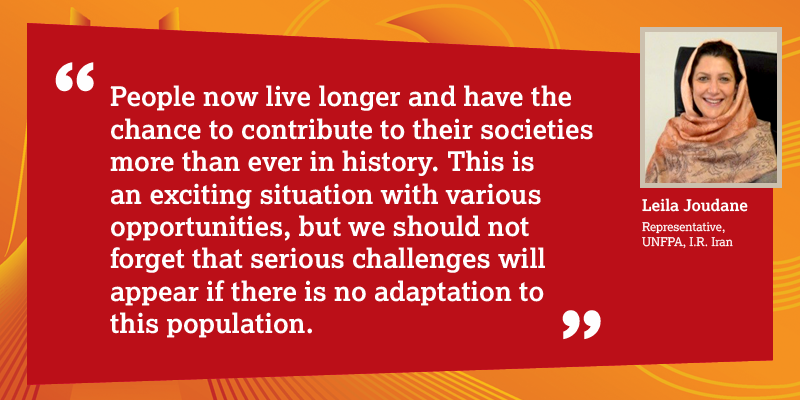 Please tell us about the current situation of older people and population ageing in Iran. How have the demographic configuration and family dynamics changed over the past 10 years?

Iran is among the countries where fertility has declined sharply, in our case from about 7 children per woman in the 1980s to 2.01 in 2016. Given this fertility decline, and the large post-revolution baby-boom generation, and despite its current young-age structure, Iran will experience rapid population ageing in the next three decades.

It’s predicted that the number and proportion of older persons (60 years and over) will increase sharply from 7.4 million (9.3 per cent of the current total population) in 2016 to nearly 30 million in 2050, constituting one third of Iran’s population. Older women will outnumber older men significantly.

Although the majority of older Iranian people are living with their family members (81 per cent as per the 2011 census), the number of older persons who are living without a spouse or any family member has increased during recent decades. According to the latest report by the Statistical Center of Iran, nearly 50 per cent of older women are living in households without a spouse, and the majority of them are the heads of households and among the three lowest income deciles.

The average household size is also getting smaller in Iran (from 5.2 persons in 1990 to 3.3 in 2016). Nuclear families with fewer members are on the rise, and obviously there will be fewer family members to support older people in the future. This will be a major challenge, particularly in a country like Iran where families are still the main source of support for older persons.

There is a significant gender gap in the literacy rate among older people in Iran. Only 24 per cent of older women and 48 per cent of older men are literate. By contrast, the literacy rate of the current young and middle-aged population is very high; therefore in the future the elderly population of the country will be com-prised of people with a higher level of literacy and education, and with less of a gender gap. This would create opportuni-ties for older persons, particularly older women, to be more active in society, since higher education is closely related to higher income, lower social vulnerability and greater social engagement.

What challenges does the country face as the population is ageing – at the household level up to the national level?
Population ageing is a consequence of development, a mark of success. People now live longer and have the chance to contribute to their societies more than ever in history. This is an exciting situation with various opportunities, but we should not forget that serious challenges will appear if there is no adaptation to this population transition. This adapta-tion should take the form of reform in social policies, which cannot be achieved without accurate data and knowledge about the status of older persons and the implications of population ageing. The lack of laws and legislation to protect older persons is another challenge–not just in Iran but in the vast majority of countries that have begun to experience this demographic shift.
Among other challenges, income security, participation and social inclusion as well as the health and care of older persons, especially women, who are usually left behind, are issues that need immediate action.

How can stakeholders in Iran respond to the implications of ageing? What mechanisms could be used to protect older persons?
The government of Iran has taken positive steps so far to respond to population ageing. The National Council of Older People has been established, for example, which provides institutional infrastructure for coordination, advocacy and policy dialogue in this area.

However, to more effectively address the needs of older persons, especially older women, significant reform in socio-economic and health policies is required, placing an emphasis on this population group. Promoting effective inter-sectoral collaboration, proposing protective laws and legislation as well as advocating effectively for active and healthy ageing are all actions that would ensure that older persons, especially women, will be protected, and will not be left behind. Such laws and legislation should also protect older women against any type of harm and violence.
Pension funds and social security organisations should be ready to serve the growing number of older persons, and they need to provide adequate financial and human resources. In the absence of universal pension coverage for older persons in Iran, and low pension coverage in general (near 40 per cent based on unofficial sources), the poverty rate could increase, which would put older persons in a fragile situation.

Ultimately, a life-cycle approach and investment in the current youth and working-age population is absolutely necessary to ensure truly effective responses to the implications of population ageing. This will help both in the near future and the long-term in mitigating risks and responding to the needs of older persons.

UNFPA and the Government of Iran will co-host the upcoming HelpAge Asia-Pacific Regional Conference. How do you feel about it and what is your expectation for this conference?

This is the first international conference on the topic of population ageing in Iran, and I am confident that it will bring great exposure for the country and its proactive approach to population ageing issues. There will be plenty of opportunities for Iranian experts and policy-makers to share their knowledge and experiences, while benefiting from presentations by high-level, international academics and specialists.
The event has received considerable attention from various countries throughout the Asia-Pacific region. We expect more than 120 international participants, including high-level officials, academics, experts, representatives of NGOs and the private sector. This shows the commitment of the international community to the issue of population ageing. More importantly, the conference can pave the way for UNFPA and the government to strengthen our existing partnership, and to mobilize resources to better respond to the implications of population ageing.
I am confident that the conference will provide a fertile ground for more comprehensive, national and multi-sectoral policies in which the comprehensive needs and rights of older persons are met, and also pave the way to introduce laws to protect older persons, especially older women, against any type of violence or other harms.