During humanitarian responses, I often hear from my fellow humanitarians, “we recognise that older people are vulnerable. But older people are covered as a part of their families in our responses”. Similarly, another common comment is, “HelpAge is there to support, and we don’t think we have resources for specific intervention”. Well, no single organisation can take care of needs of all vulnerable older people in all humanitarian contexts. The guidelines and standards now also call for all organisations to be more inclusive. As the first step to ensure that “no one is left behind”, we should consider age as a unit of data collection and analysis that intersects with gender and disability across the life stages. 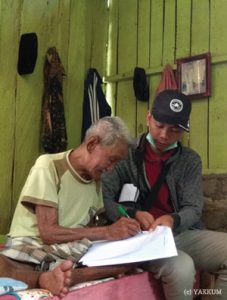 There are guidelines and tools for the disaggregation of data by sex, age and disability available from sources such as the Sphere Handbook, the Inter-Agency Standing Committee (IASC) Gender Handbook and Humanitarian Inclusion Standards (HIS) for Older People and People with Disabilities. HIS is complementary to the Sphere and are equally implementable for any organisations which is signatory to Sphere standards.

Our recent study “More at risk” revealed that older people are often only mentioned as part of a ‘household’, ‘vulnerable group’ or ‘affected population’. In many cases, “priority” means older people should be first to receive assistance. Thus the assistance they receive is a standard package, which most times does not address their specific needs. When priority is not matched with appropriateness in the different response phases, the issue of exclusion worsens. Vulnerable older people after a cetain age have specific food and health requirements. The WASH facilities are either not age- or disability- friendly, or out of reach for them. In our needs assessment after Sulawesi Tsunami and also during the Typhoon Mangkhut in the Philippines in 2018, more than 40 per cent of the older people were found to have some level of impairment which restricted them to access relief. More than 50 per cent of the older people in both emergencies needed regular medicines but had no access. Similarly, access to health care was difficult as many people did not have enough information or were unable to reach the location independently.

In most emergency responses, data concerning older people is collected using a single category, such as ‘over 60’, instead of distinguishing between people aged 60–70, 70–80 and over 80. We experience that every age-group has their own problems. Normally people between 50-60, and 60-70 are active and are well respected in the communities, and given their experience, they can contribute to the response. This age group is also normally found to be the primary bread winner of the household; however, most organisations prioritise their livelihood assistance to people who are below the age of 50 years. If data is collected and analysed as per standards, it can provide the actual need of the vulnerable population based on the age-cohorts.

HIS provides guidelines on how to collect sex-, age- and disability-disaggregated data (SADDD). It is important that we all adhere to it where possible. In case it is difficult to collect disaggregated data immediately following a disaster (given the rush to response), one should use the expanded data sets collected by Statistical department of the country, as a reference guide for planning. 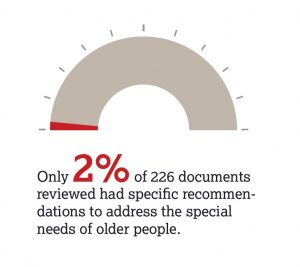 During the study “More at risk”, we reviewed 226 documents on needs assessment, evaluations, and other studies done for humanitarian responses. Only five reports had specific recommendations to address the special needs of older people. This shows that that even though there were organisations that collected disaggregated data, the analysis of the information was not done in an inclusive manner.

To ensure that the overall humanitarian response meets the needs of diverse affected populations, including the specific needs of older men and women, age-inclusive data collection and analysis is the first step.

About the study “More at risk”

Conducted in 2018, the research focused on five recent disasters, namely the 2008 Cyclone Nargis in Myanmar, the 2010 floods in Pakistan, the 2010 Merapi Eruption in Indonesia, the 2013 Typhoon Haiyan in the Philippines and the 2015 Gorkha Earthquake in Nepal. The countries covered by this study were Bangladesh, Cambodia, India, Indonesia, Myanmar, Nepal, Pakistan, Philippines, Sri Lanka, Thailand and Vietnam. 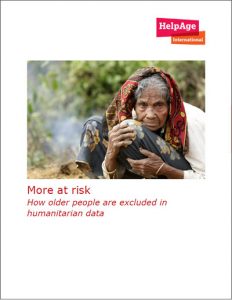 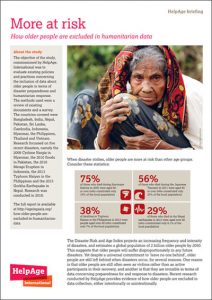