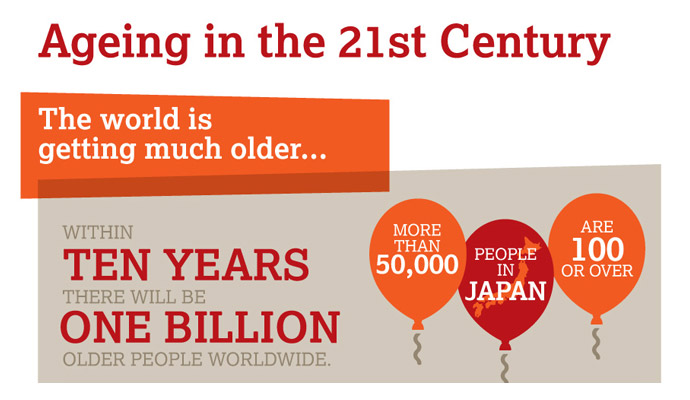 Older people in the Asia Pacific

The Asia Pacific, with over 4.6 billion people in 2019, is home to 60% of the world’s population. It is a diverse region, with seven of the world’s ten most populous countries, and also some of the world’s smallest island nations in the Pacific.

The region is at the forefront of population ageing with the number of older people expected to triple by 2050 to 1290million. At this point, one in every four people will be over the age of 60. Leading the way will be China, with an estimated 485 million older people. Other countries that will have large populations of older people include Indonesia (74 million) and Japan (45 million). The main reasons for this demographic change are rapidly declining birth rates and longer life spans. In the most advanced countries in the region, life expectancy at birth is over 80 years.

Growth of ‘older-olds’
Another trend is the growth in the proportion of older-olds, or those 80 or older. For example, in 2019 people over 80 made up 2.8% of Thailand’s total population. In 2050, it is forecasted that those over 80 will make up 10.7% of the total population in Thailand.

Women outnumber men
Women tend to live longer than men, resulting in a larger number of older women than older men, constituting the majority (53.5%) of the population aged 60 or older in the Asia Pacific. In 2012, for every 100 women aged over 60 in Asia, there were just 90 men. The proportion of women also rises further with age. These factors create the so-called “feminisation of ageing”.

Population ageing presents challenges societies must adapt to and governments must respond to, for example by adjusting social and economic policies. Older people are often vulnerable, particularly women, many of whom are widowed. Many older women suffer poverty due to disadvantages experienced throughout their lives, including lower levels of education, limited participation in formal work and unpaid care giving work.

Income security in old age
The proportion of older people living in poverty tends to be higher than the proportion of poor in the general population. Only about 30% of the older population in the region receives some form of pension. However, evidence shows that social (non-contributory) pensions available to older people not only reduce their poverty but reduce intergenerational poverty. For example, pension income is spent on children in the household, leading to significant improvements in their education and health.

Access to appropriate health services
Maintaining good health and access to health care is a concern for older people throughout the region. Ageing brings an increased risk of developing chronic disease and disability. Large numbers of older people suffer from non-communicable diseases (NCDs) such as cancer, diabetes, cardiovascular disease and dementia. NCDs are already the single largest cause of both mortality and morbidity in most developing countries. Worldwide, NCDs account for nearly 90% of the disease burden for the over 60s. The quality and cost of health care is important. Health systems are currently set up to address communicable diseases, rather than chronic conditions. Health systems and the training of health professionals should be adapted to meet the requirements of older people.

Community recognition and participation
Older people contribute to their family and community in many ways, both financially and in-kind. They can be found acting as mediators, educators, workers, volunteers, homemakers and caregivers. They are valuable sources of knowledge, history and guardians of culture. Older persons in rural areas often have expert knowledge of traditional farming practices, including ways of coping with environmental shocks and food shortages, which may be crucial for the survival of rural communities in times of crisis. In spite of the growing recognition of the role of older persons in society, there is still a long way to go. Changing support structures combined with migration are gradually weakening traditional informal support provided by family and community. In many areas, older men and women are still seen as dependants and a burden to society. Increasingly, older generations are becoming active in political processes, as well as forming their own community based organisations which enhance equitable and inclusive local development. These organisations, often known as older people’s associations (OPAs), help members to access microcredit, business loans and job training. They organise health checks, link to local health services and provide training in community based home care as well as reducing isolation and creating social support networks.

The world is ageing as a result of lower birth rates and an increase in life expectancy.

Population ageing presents challenges societies must adapt to and governments must respond to.