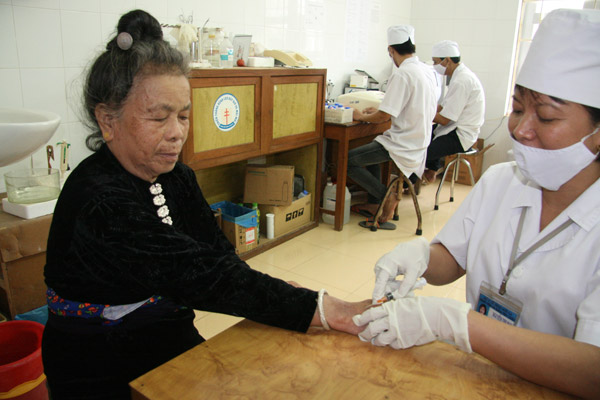 Health is a key concern for older people, ageing increased likelihood of functional limitations and chronic illness. Poor health affects not just the older person, but their family who may need to provide care for someone now unable to work or who needs to be supported.

Chronic diseases are the biggest burden
The overwhelming burden of disease in older people comes from non-communicable diseases (NCDs) such as heart disease, stroke and lung disease (the biggest killers) and visual and hearing impairments, dementia and osteoarthritis (the main causes of disability).

Worldwide, more than 46 per cent of people aged 60 years and over have disabilities and more than 250 million older people experience moderate to severe disability. NCDs are commonly thought of as “diseases of affluence”, however four-fifths of deaths from NCDs are in low and middle income countries.

Mental wellbeing
There is growing recognition of the threat of mental illnesses in older people in Asia, especially among older woman as they live longer than men.

Dementias are a group of diseases that involve loss of short-term memory and other cognitive abilities, resulting in the inability to carry out daily functions. It is estimated that the number of people in the Asia Pacific region with dementia will rise to 64.6 million by 2050.[ii]

There is a lack of adequate resources and  health policy initiatives in most Asian countries to deal with this threat, which is often viewed as an incurable disease.[iii]

Active ageing
Active ageing means helping people stay in charge of their own lives for as long as possible as they age, and where possible, to continue to contribute to the economy and society. It aims to extend healthy life expectancy and quality of life for all people as they age, with the goal of maintaining autonomy and independence.

Access to health care services remains challenging
A study on primary health care in five Asian countries found many participants had at least one chronic disease while a high number reported they never had health screenings or they had them infrequently. Older people raised concerns regarding the availability of health care services in rural areas.  The study found older people’s ability to access services was constrained by a number of factors such as cost, travel and the demands of daily life such as tending to chores and minding grandchildren.[i]

Care needs are not limited to individuals’ own needs though, as support may also be required to help care for disabled or ill partners. Older people are also taking on increasing responsibilities, for example care of children or ageing parents.

Older people tend to prefer to remain in their own homes and live close to children. However older people living in poverty may not be able to afford to live separately. This is more likely in towns and cities due to higher accommodation costs.

Types of care
There is no one single solution for responding to the needs of older people although most older people prefer home care over residential care where possible. The goal is to keep older people as healthy and independent as possible so they can delay falling into greater dependency. The care options available are partly determined by the situation of each older person and the resources of each country.

Poverty is one of the most significant issues for older people in the region, and without access to pensions or free health care, many cannot afford the services they need. At the same time, rapid population ageing will exert unprecedented demand on existing care and health services. Countries are unlikely to be in a position to meet these needs without early and significant investment in infrastructure and services.

Family-based care is likely to decline due to changing family structure, labour force migration and increased female participation in the workforce. However there are opportunities to use existing structures and institutions, including local authorities, community based organisations and religious centres to develop community-based models of care.