In Thailand, more people are living longer than ever before.  This means a vast increase in a valuable resource to society: older people who work, who raise grandchildren, who volunteer their time in the community, and who are able to meaningfully share their culture and values with younger generations. With a small but nonetheless universal pension, and some meaningful engagement on population ageing at the government level; Thailand has begun the challenging process of meeting the needs of an ageing society. Significant challenges remain, largely due to the sheer rapidity and magnitude of the demographic ageing in Thailand, including work and education opportunities for older adults, long-term care plans for older people and establishing age-friendly housing. The government has revised and updated policies on ageing in line with the Madrid Plan for Action on Ageing (MIPAA), but existing laws and policies on ageing are not always put into practice.

The information on the ageing population in this country is presented under three sections: 1.) Situation of older people, 2.) Key facts  and 3.) Government policies related to older people. 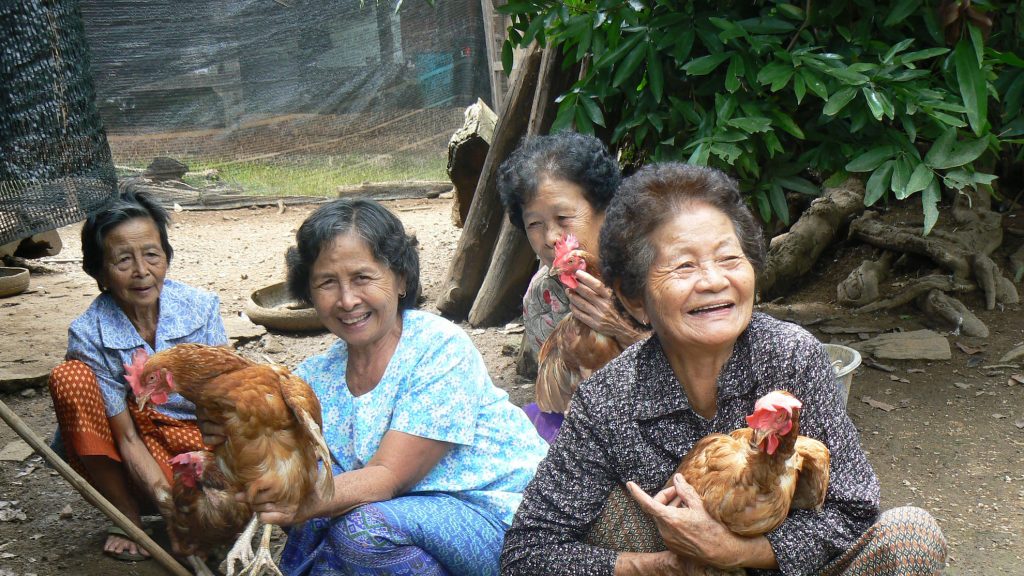 Care support for Older People: In practical terms, this demographic transition translates to challenges with care and support of older people. Data collected for The Situation of Older People in Thailand report in 2007 and again in 2011 show that the well-being of Thai older people has continued to improve. Overall only 15% of persons 60 and older indicated that they need some assistance with their daily living activities. This increases relatively slowly with age until 75, and quickly after that. As a generalisation, as older people reach 75 and beyond, many require some care and support. Traditionally in Thailand, this was done at home.  However, there is a shift to low fertility and an increase in migration of adult children to find employment. This lowers the ratio of working age adults who are able to support older people in their family. About 50% of older people do not have a child living in the same village/municipality and 16% have no living children. All of these changes mean that adult children cannot always meet the care and support needs of older people.

The future role of older persons in providing care to young dependent grandchildren is also subject to change as a result of demographic trends and perhaps normative change in the view of parenthood as well, although the latter is very difficult to predict.

Older people and poverty: While 75% of older Thais report that they are satisfied with their financial status, older people face a higher risk of poverty than average because of being unable to work and earning a lower income. In 2010, 10.9% of older people in Thailand were poor compared with 7.7% of the general population. An additional 7.1% of older people are near poor; vulnerable to become poor in the event of even a small economic shock like a medical bill. The National Statistical Office report on Survey for working in Old Age (2011) show that about 33% of older people still work daily and 90.3% of them are working in informal sectors.  Other key sources of income come from intergenerational exchanges or other family support and government pension or old age allowance. According to the latest World Social Protection Report 2017-19, 83% of people older than the statutory pensionable age in Thailand receiving an old-age pension (contributory, noncontributory or both).

Below are the key statistics on Thailand’s population of older people:

National policy on older people: In 1991, as the United Nations Assembly recognized elderly rights with respect to autonomy, involvement, care, self-satisfaction and esteem, Thailand established the “National Committee of Senior Citizens.” The government’s current policies and programs are in line with the Second National Plan for Older Person (2002-2021).

This plan focused on the development of policies and programs to support older persons. Some successful program activities are highlighted:

The National Strategy for 2018-2037 was created in Thailand to prepare for an aging population focuses on human resource development and social equality development. The Act on Older Persons was revised in 2010, and the comprehensive ageing policy aims to improve quality and equality of education, promote savings and creating good practice in elderly orientated communities. The aim of the National strategy is to prepare for an aging society, across social, health and living.

Health and care: The Act on Older Persons also aims to promote healthy living, access to healthcare and long-term community-based care. As well as promoting pre-aging healthy behaviours and increasing awareness of health risk factors and training more age friendly health care professionals. The age-specific mortality rates of the Thai Population except among the highest age group have been declining for more than four decades. However, age-specific mortality rates have increased with age, with the highest in the age group of 70+ years in both sexes.

At primary health services in Thailand are provided through networks of “Health Centres” and Primary Care Units (PCU) run by The Ministry of Public Health (MoPH) and “Community Health Centres”, which are available only in Bangkok, are generally staffed by 1-3 physicians and allied personnel. These centres provide curative, preventive and promotive but rarely on rehabilitative services.

In 2001, in order to cover 22% of the total population who were not covered by any kind of health benefit scheme, the government announced the universal coverage policy on health care finance.

Older persons are valuable resources who should pass on wisdom and experience to younger generations. People should be aware of the importance of older persons, so that they should receive greater opportunities to make use of their knowledge and experience in working for society.

Older people’s associations:In order to promote good health among the elderly, the Government has encouraged the establishment of more clubs, or centers, where the elderly can join social activities and events in local communities. This will help promote physical and mental health among senior citizens. The government has committed to developing welfare partnerships among the state, local authorities, community and civil societies. Targeted assistance to the poor and disadvantages to allow for social participation especially amongst the disabled and vulnerable.

Senior Citizens Council Of Thailand (SCCT) is in the process of setting up a mechanism to provide greater occupational opportunities for the elderly. It is working with both public and private sectors in providing funding sources for older persons to support their businesses.

Social pension: In 2009, the government made its social pension policy, The Old Age Allowance, universal. This provides greater income security for older persons. Though the sum is not high, the pension does serve a function as a social protection mechanism that is a dependable source of income regardless of economic condition.  As such, it provides some protection from economic shocks, particularly for poor and near-poor older people.

The Civil Society Network on National Pension (Thailand), which Foundation of Older Person’s Development (FOPDEV) and HelpAge International are part of,  has drafted a new National Pension Act, to be proposed to the government after the next general election, which is expected to take place in 2017. The new Act aims to ensure that income security in old age is guaranteed as a basic human right, and to strengthen the old age pension system through :

Coordinated by the civil society network core group, the new Act will be publicised to and shared with CSO networks across the country in order to secure public support that will be immensely important for the new Act’s approval.

More information (in Thai) can be found here and FOPDEV website.

The following are publications and resources related to the Thailand’s population of older people.