The information on the ageing population in this country is presented under three sections: 1.) Situation of older people, 2.) key facts  and 3.) Government policies related to older people.

In 2018, a Global AgeWatch Insight with focus on health and care, and universal health coverage (UHC) was released. Among 12 selected countries, you can find specific country report card for Vietnam. 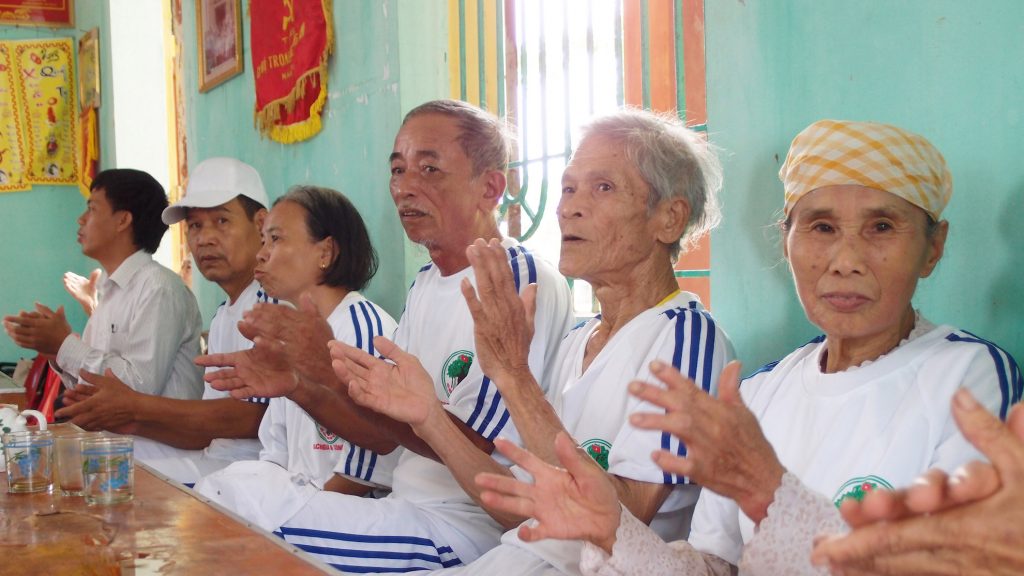 In Vietnam, the number of older people is increasing while the birthrate has dropped, accelerating the rate of population ageing.

Demographic characteristics: Almost all older persons in Vietnam have married but around 40% of older persons are widowed. Gender imbalance is more pronounced in older age groups. For example for every man over 80, there are 2.39 women. The majority of older people (72.5%) live in rural and mountainous areas.

Care and support: According to the national surveillance on the elderly in Vietnam (VNAS) conducted in 2011, over half of the elderly (56%) self-assessed their health conditions as weak (49.4%) and very weak (6.7%). In addition to physical care, older people require emotional support. More than 39.2% of the elderly doesn’t have health insurance card.

Poverty: In 2018, the Human Development Index ranked Vietnam 116 among 189 countries. In 2014, approximately 29% of older people (equivalent to 2.76 million people) received pension and social insurance support. In half a decade, this figure has risen with 39.9% of those older than the statutory pensionable age in Vietnam receiving an old-age pension (contributory, noncontributory or both). Another 1,505,699 older people (16% of the older people) receive social allowances, of whom 1,410,064 are aged 80 and above, and 95,635 are living alone and destitute.

Below are the key statistics on Vietnam’s population of older people:

Vietnam is a signatory to the Madrid International Plan of Action on Ageing (MIPAA).

National Policy on older people
Population ageing has been included as one of the prioritised issues in the new national strategy on population and reproductive health for 2011-2020. The Vietnamese Government has issued many national policies for the elderly including:

Health and care
The project of Intergenerational Self-Help Club Model was implemented in 2016, with the aim of addressing rapid ageing in Vietnam, with the hopes of establishing at least 1 ISHC or equivalent in each commune in Vietnam by 2020 – 3,200 ISHCs across the country. ISHCs can provide annual health checks and home care for disadvantaged elderly in Vietnam. Tasks of the care assistants provided by ISHCs can oversee medication intake, aid personal hygiene, share health knowledge with communes and practice simple exercises with the elderly.

Older people’s associations
There are 11,122 older people associations (OPA) at all communities with about 99,578 branches (at village level) in Vietnam. All OPAs belong to the Vietnam Association of the Elderly (VAE) which is a mass organization with more than 8.3 million members over the country. VAE conducts many activities for care and promotion of older people in Vietnam (longevity ceremony, rights protection, establishing clubs, advocacy, etc.) and contributes much to community and society. At present, Vietnam has nearly 60,000 sport, exercise, art, professional and entertainment clubs used by 2,597,630 older people. One special model of OPAs is the multifunctional Inter-generational Self-Help Clubs (ISHC). This model, developed by HelpAge International, includes elements of microcredit, livelihoods, health promotion, rights and entitlements and more. At present there are more than 830 ISHCs in 12 provinces with an average of 55 members per club. The ISHC model has been recognized by the government and donor agencies as a vibrant mechanism for community-led development.

In 2012, the National Action Plan on Aging period 2012-2020 was approved with specific indicator of replicating ISHCs in over country.

At the moment VAE and MOLISA are developing national proposal “Caring and Promoting the role of older people”, this proposal is going to help replicate ISHCs whole country according to National Action Plan of Aging period 2012-2020.

Volunteers of the Intergenerational Self-Help Club project focus on daily support for the elderly, and encouraging active, healthy and social lifestyles. ISHCs will provide help to the elderly with daily tasks such as going to markets, doing housework, and getting around easily.

Social pension
A non-contributory social pension offered to all older than 80 years of age and to those age 60-79 who are identified as poor. 1.4 million over 80 receive the pension, along with about 100,000 60-79 year olds.  An additional 1.8 million pensioners receive the formal pension described above as part of social insurance.  This leaves a gap of 5 million older people who do not receive any form of pension. The benefit level for the non-contributory social pension is about 9 USD a month, though some groups receive more. Those aged 60-79 who have a severe disability receive 13.5 USD a month as do those aged 80 and above who are poor, live alone and without family support. Those over 80 who have a severe disability as well, receive 18 USD a month. The trend in Vietnam is towards progressively lowering criteria for eligibility for social pensions and increasing extended benefits to more groups.

Our network members and partners

In addition to the HelpAge International Vietnam Country Office, the following organisations are part of the HelpAge network in Vietnam:

Resources
The following are publications and resources related to Vietnam’s older population.

More information can be found on the following websites:
English