One year after Haiyan: a positive spirit triumphs over adversity

One year after Haiyan: a positive spirit triumphs over adversity 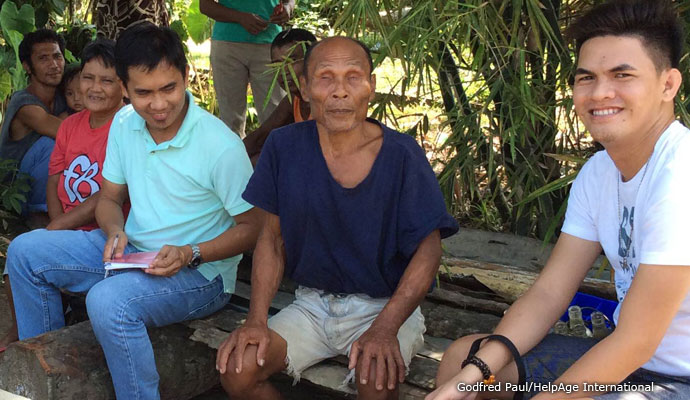 Bonifacio Gonzaga is 65 years old, lives by himself in a small hut and has never married. He has been completely blind since he was 18 months old. His house is on a small piece of land which was given to him by his mother before she died. Bonifacio is one of the beneficiaries of the shelter and livelihood support.

He is a very positive person with an infectious smile. He has not allowed the fact he is blind to take away from his joy; a testimony to the difficulties he has faced in his life.

For 30 years Bonifacio picked coconuts for a living. He was paid 5 pesos per tree, making about 75 Pesos (USD2) a day. He taught himself to distinguish between the sounds of the ripe and unripe fruits by hitting them. His employers were happy with his work and it gave him a sense of worth. Sometimes Bonifacio still climbs coconut trees when he is bored.

Some people in the community had been warned about the oncoming typhoon before it hit and so Bonifacio’s neighbour, took his family and Bonifacio to a nearby shelter where they were protected. Beneficio said “I cheated death”.

His house had been completely destroyed by the typhoon when a coconut tree fell on it. With the help of his nephew who lived nearby, he put up a temporary hut which became his home ever since.

Bonifacio is able to do everything by himself, including cooking his food. He does not have any income now and so depends on his sister. In return, he helps to weed her vegetable garden so that he does not feel like a burden. Bonifacio remains in good health because he has stayed physically active.

Bonifacio said “Most afternoons, when it is not raining, I like to sit in the shade of the bamboo grove. Sometimes my neighbours join me and we talk. We talk about the destruction caused by the typhoon and how we are trying to help one another recover”.

He enjoys listening to the radio which his sister brings with her when she visits him. This is sometimes his only source of entertainment. Bonifacio said “I like listening to a romantic serial.”

Bonifacio had received 2000 pesos from HelpAge COSE which makes sure he has food regularly. The HelpAge COSE team will be getting Bonifacio a government ID card so he can access the state pension.

He was a beneficiary of the Shelter programme with HelpAge COSE and so is expected to have a new house by Christmas. He said “I am grateful for the support by being selected for the shelter assistance. Thank you.”

HelpAge COSE provided Bonifacio with a new radio with rechargeable batteries which he was very happy with. He said “This is the one gift I will keep carefully. This is my companion who talks to me and gives me information about disasters. I love this. Thank you very much.”