One year after Haiyan: disability and disaster

One year after Haiyan: disability and disaster 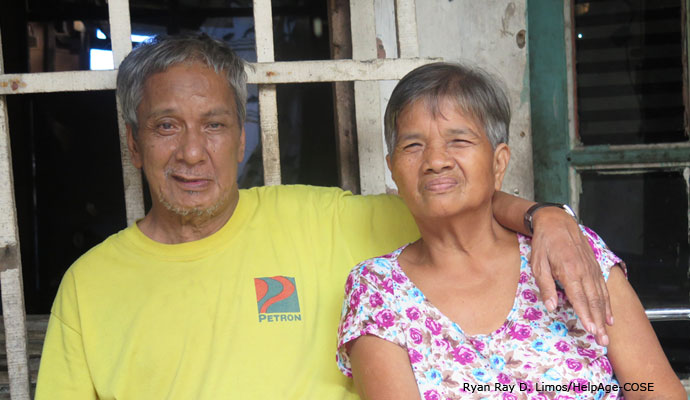 Delia is 65 years old and is married to Santiago who is 66. They have 2 children (one boy and one girl) who have their own families. Delia and Santiago have 4 grandchildren.

“My grandchildren always visit us since they are just next door. We have been living in this area for about 20 years. We used to live in the other barangay but we chose to settle here permanently.

Before the typhoon I was a cook in a Carenderia, a small restaurant, and my husband used to be an inspector for a bus company. More than 20 years ago my husband fell in the bus and when he woke up the next morning he was unable to stand. We went to the hospital but nothing happened. He had a Palmar Hyperhidrosis, which is excessive sweating of the hands. Since then, half of his body has been paralysed and I had to take over the responsibility of working for my family.

Just before typhoon Yolanda struck us, we had already moved to another house nearby because we felt it was safer there. I was with my daughter and grandchildren. We had to leave my husband in our house because we couldn’t carry him. He said ‘You go there. I can handle myself here.’ The water rose so fast and it reached more than 8 feet. I was so worried but I could do nothing about it. Suddenly my daughter’s husband arrived and rescued my husband.”

Santiago said “I was almost drowning then someone grabbed my legs.”

Delia continued “After Yolanda, our house and my small business was completely washed away. There were only soft drinks left which we used to survive. Luckily, the house where we stayed had food to eat. Even though we had little, we shared it with each other. We cooked the scattered rice. My children helped us build our temporary house. I was worried because my husband’s feet were swelling. He suffered a lot of injuries when he nearly drowned. There were no doctors or hospitals nearby. After a few days we were given assistance from different organisations. My husband got his check up and we were given medicine and a chair for him.

My house was destroyed and so was my small store. My work as a cook in the restaurant stopped because it was also damaged. I received P10,000.00 from HelpAge COSE in April 2014 and I used it to restart my small business. I used some of the money to fix other parts of my store.

The assistance helped us a lot especially for everyday things. The money helped to fix our house little by little. Before I didn’t know what I was going to do about food but just sit and wait for assistance from those kind hearted charities. Now I can buy food and medicine for me and my husband.

I hope to have a healthy and safe life. I am very happy that HelpAge COSE helped us so much. Thank you very much for giving us the resources to recover.”