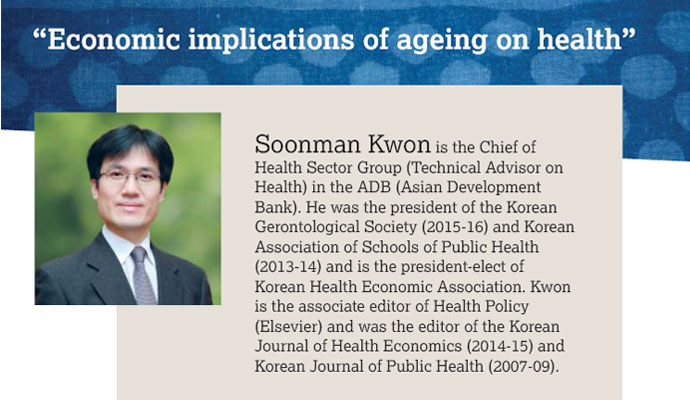 Why is it important to discuss the economics of healthcare for older people in Asia at this time?

Because many Asian countries are experiencing rapid ageing of their populations; not just Japan and Korea, but also countries like China, Hong Kong and Vietnam.

What strategies can governments employ to ensure the affordability of healthcare for older people?

Universal health care should be one of the highest priorities for all governments, for both financial and health reasons. Money spent on healthcare is not simply an expenditure, but also an investment in economic development, as a healthy population can lead to economic growth.

At the same time, there is the element of equity to consider. We need to pay attention to the poor, especially older poor people. Investment in the poor elderly may not bring a direct economic return but from a human rights perspective, we should provide support.

Universal health coverage (UHC) has both moral and financial elements. From a moral perspective, we should ensure universal access to healthcare for everybody, including the older population, but we also need financing to support UHC. Governments should provide financial support or some kind of public insurance mechanisms. At the same time, to make UHC sustainable, we should make sure that healthcare services are delivered in a cost effective way.

What are the consequences for families when national systems don’t enable access to healthcare?

Without universal healthcare based on a public funding mechanism, when family members get sick, the family have to pay for medical care out of their own pockets. This is a huge financial burden, and it can have a catastrophic impact on household economy. Because of the high cost of healthcare, some families become impoverished.

What options are available to an individual needing long-term care in middle income countries (MICs) in Asia?

How can groups of older people get involved in long-term care?