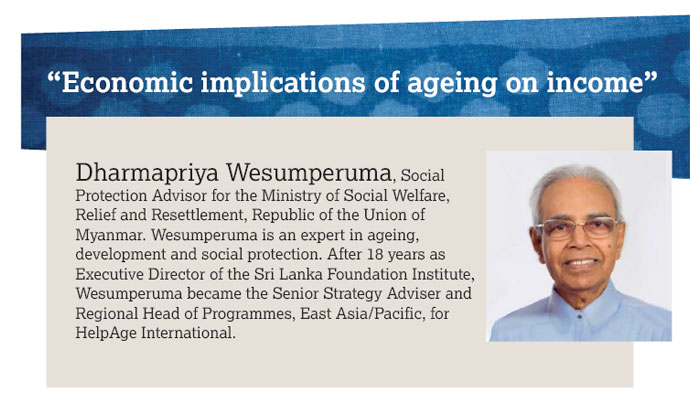 What are the main sources of income in old age?

However, in reality, the story is complex. Sources of old age income and income levels depend on a set of factors such as level of economic activity, household structures, market volatility, government policy, lifestyle behavior and diversities relating to gender, age groups and the overall economic-income context of a given society. These complexities weigh heavily, especially in low-income Asian contexts with large informal sectors and a sizable percentage of households struggling around subsistence levels.

As Asian societies age rapidly amidst changes in household structures and family size, there is a definitive leading role for the State, irrespective of whether this involves public income sources, like pensions or provident funds or social pension, or private income sources such as family transfers, work earnings, savings/assets. We hope the upcoming regional conference in Hanoi will investigate the role of the State in this regard and suggest feasible options for policy support.

As societies age, what are the implications for the incomes of households with older people?

In Asia, two income sources stand out clearly as major contributors; earnings from work and family support. What tends to happen is a decline in these two major old-age income categories, especially after about 70 years of age. The ability to work and earn declines due to health and disability issues as well as decreasing employment opportunities at an older age. Often, older women experience an increase in family responsibilities. At the same time as the parents are getting older, their adult children who are now in their middle age are experiencing multiple responsibilities and increasing living costs, such as children’s education, as well as challenges of impending retirement or decline in their own income sources. Beyond the age of 70, the main income source from work declines and health costs escalate, so the main implication is the need for government intervention and support. In the past, these issues were basically handled by family and the individual; but with rapid ageing, public action becomes a necessity.

With population ageing, will the increasing number of older people become more of a financial burden on families as household sizes shrink and people live longer?

We have to recognise that older people continue to be a resource to the family and the community. The issue of being a burden comes up when they are less active and have increasing health and disability issues and health care costs. This is when families become increasingly vulnerable. This issue of being a burden is determined primarily by the health and disability status of older family members.

At some stage in life, especially in the later years, a period of dependency is often unavoidable. What is necessary is to keep this dependent phase of life to the minimum number of years by leading active and healthy life styles.

This cannot happen by beginning to adopt healthy life styles in old age. That should be a lifestyle approach to be promoted by the individual, family, society and the government to ensure that all generations age well.

Many people wonder about the implications of funding pension systems with an ageing population. How worried should we be about this challenge?

Formal pension systems and their sustainability should be based on long term actuarial studies, taking lessons from the experiences in the developed countries. Contributory pension is a main pillar in a national pension system. Formal pension systems should ensure that young adults have a sufficient amount in their pension funds to support them when they get to old age. With appropriate design and financing modalities based on strong actuarial forecasts, safe investments, healthy regulatory frameworks and effective and transparent fund management devoid of politics, contributory pension funds should in fact be a source of economic strength for a nation.

The issue of the sustainability of formal pension systems is also closely tied to retirement age. A main reason for the so-called pension crises in the more developed countries is that retirees continue to live longer than expected when retirement ages were initially fixed many years ago. Linking retirement age to healthy/productive life expectancy is a lesson for developing Asian countries. When it comes to formal pensions, the main problem is sustainability, with coverage ranging from only about 10 to 20 per cent of the labour force in low income and lower-middle-income countries.

For middle-income countries (MICs), there have been many arguments about funding non-contributory social pensions. Governments often say that there is a limited budget for such schemes, especially universal schemes. What are the options?

Issues of old-age income cannot be addressed in a compartmentalised way – that is, addressing social pensions separately from other old age issues. Rapid ageing, demographic change and their implications on the family, society and the economy are also critical. Rapid ageing should be addressed as a major national planning and development issue. It is important for governments, who usually focus on short term issues and solutions, to take a longer term strategic view of the economic and social implications of rapid ageing and assess feasible options to address these.

The fact that many counties have adopted a social pension system demonstrates that ultimately the decision is more a matter of political will than an issue of affordability. In our region, Nepal is a striking example in this regard.

What can civil society do to ensure that governments respond to the needs of people on this issue?

It can practice focused advocacy. This involves firstly, crafting clear and concise messages based on the evidence of feasibility, and also using best practices demonstrating impact.

These messages should then be directed to the highest decision-making levels of political leadership at the right time and in the right context. This requires political will.

It’s also important to maintain a regular dialogue with decision makers in key ministries, especially those responsible for national planning and budgets.

Another strategy is to mobilise public opinion. This campaign should be led by older people themselves, which will enhance legitimacy. Older People’s Organisations have the potential to be mobilised, as they have done through Age Demands Action (ADA) campaigns.

Finally, it helps to build coalitions in support of a wider social protection agenda.