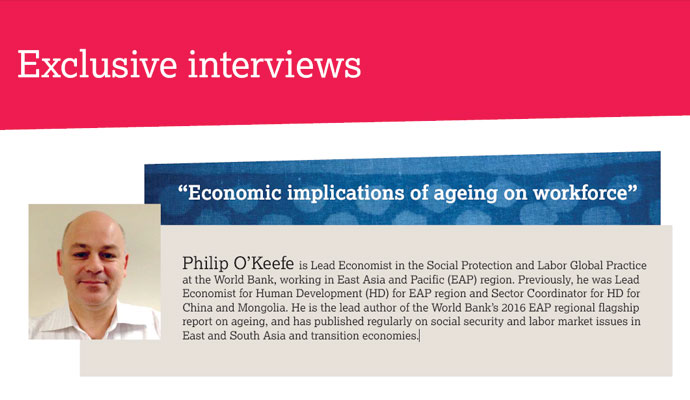 Can you give a brief overview of current workforce trends in Asia, particularly among middle income countries?

I think there are basically three broad groups. One includes countries like China and Thailand, where you have a declining workforce at the same time as the ageing population is increasing rapidly. In the second group of middle income countries (MICs), I’d consider Vietnam, Indonesia and Malaysia. In these countries, rapid ageing is only just starting, as in Vietnam, or it is going to start over the coming 5 to 10 years, as in Indonesia. At the same time, the workforce is still growing slowly. So those countries will have a little more time to adjust to future trends.

Countries less affected by rapid ageing include the Philippines and some of the lower income countries like Laos, Cambodia and Myanmar, where the ageing process is a little further in the future.

What happens when a country has an ageing population that is increasing in the workforce?

It’s quite complex, but what we can say is that as the workforce ages, people are better and better educated. Young people are passing through middle age and then ageing further, which has a positive effect on the workforce.

At the same time, in terms of productivity, Asia is very different from other regions – like Eastern Europe or Latin America- in that the people who are retiring earliest are urban and educated, in contrast to rural people who are less educated but continue to work much longer. So that’s not good for productivity. In terms of the productivity of older and younger workers, from studies in countries such as Korea and Japan, older workers remain highly productive and very good at what I call crystalised skills – skills that are based on knowledge and experience, whereas their productivity tends to decline in fluid skills, such as adaptability to solving problems quickly.

So, one lesson is to combine the best features of older workers and younger workers. A mixed-age team can provide a good combination of both their strengths in productivity.

Another key point, particularly important in Asia, is that productivity is measured by what is produced – not only how much output you have per worker, but also the price of those workers. Many East Asian countries employ seniority wage systems, meaning the older you get, the higher wages you’ll get. However, that is not very good for productivity because if older workers are not increasing their level of productivity but they are still getting an increase their wages, clearly their productivity is going to be lower.

What strategies can governments employ to maintain the size of their workforce?

Several countries in Asia have a low female participation rate in the labour force, so that would certainly be an area for those countries to focus on if they want to offset an ageing labour force. Another point is immigration. Countries like Singapore, Hong Kong and China have a high rate of immigration and are able to keep their labour force refreshed and of a decent size. Korea and Japan, by contrast, have very low immigration levels, so they probably need to be more flexible on that point in the future. The third point is that, in the urban formal sector, workers are retiring too early, so that needs to be addressed. One solution could be to provide more opportunities for flexible work hours and part time work, so that people don’t go from full time work to full retirement from one day to the next day, but kind of glide into retirement. The final point concerns seniority wage systems. We probably need to continue to be proactive in weakening the seniority labour systems and making wages relate more to the productivity of workers.

What strategies can governments employ to maintain the size of their workforce?

What we find is that older workers, particularly those who are in their 50s or maybe early 60s, often want to work. The problem is often on the employer’s side; they have a rather negative perception of older workers being less productive, though obviously older workers are more attractive if they’re less costly.

Do you think that flexible and prolonged retirement age will be problematic for young workers just entering the workforce?
It’s a very common concern across the world that if we keep older people working, it will take jobs from younger people. In fact, studies show that extending the working life of older workers doesn’t have a negative impact on the employment of younger workers, but it tends to have a slightly positive impact. Firstly, if you have more elderly workers in the labour force, output and economic growth can be higher, and therefore the overall demand for labour tends to be higher. Secondly, the kind of jobs performed by older and younger workers are very different, including positions such as senior management. Also, 50 per cent of jobs our children will take on do not yet exist. So this is another area in which there is no competition between
older and younger workers.