Interview with John Beard from the World Health Organization (WHO)

Interview with John Beard from the World Health Organization (WHO) 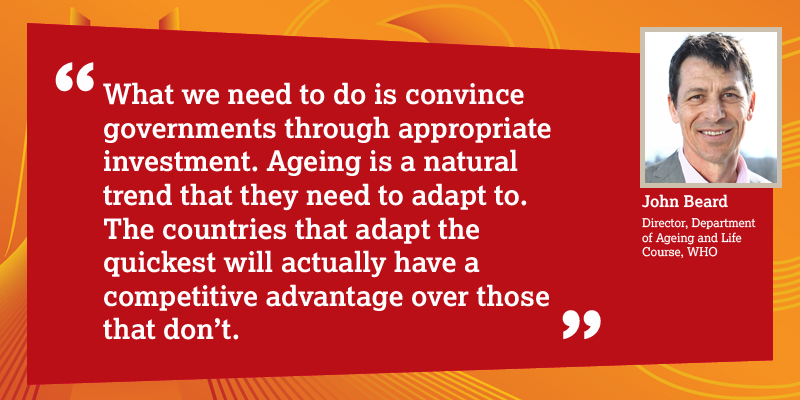 We understand that you will retire soon from the WHO. How will you feel being categorised as a “retiree”?
I don’t think there is such a category. I will be leaving WHO and I’ll be leaving because of a discriminatory mandatory retirement age policy. But just because I’m leaving WHO, I don’t anticipate falling into a different category of life. I will just start doing different things – exactly what they are I’m not quite sure yet. But in fact, it’s interesting with the experience I’ve had to take some time and think what or how I want to reinvent myself, after WHO and at this stage in my life.

Related to this, how is the concept of “old age” evolving? How should societies approach this rapid change in demographic configuration?
I think we need to move away from the traditional idea of old age and this ties in with what I was talking about as concerns retirement. I don’t think it happens that one night you go to bed at midnight and suddenly fall into a different category and become an older or a retired person. I think life is a continuum and presents different challenges at different times and we need to adapt to them. The first thing is to understand that there’s no such thing as an older person as a stereotype that society has created. Now as we get older, we tend to experience various biological changes that present challenges, and we need to look at what we can do to minimise those challenges, to help people retain the highest possible capacity that they can. But what also happens is, because we categorise people as older, society then imposes a roll on them. We need to break down social attitudes so that we’re not imposing anything on older people, but rather providing them with the personal and the social resources that enable them to live the lives that they want to live, to do the things that they value and lead lives of meaning and dignity. The starting point is that we need to think about how we can develop the abilities of older people, both their personal abilities and the environmental support that enable them to achieve their goals.

Historically, how would you describe the role that families have played in the long-term care of older people, particularly in Asia?
It is different in different parts of the world, but in most places, families are central to the provision of long-term care. In some places they do that quite well; in others, families are just left without any support or any guidance. For example in Africa, we know that about 20 per cent of older people don’t have any family, so it’s impossible for the family to play a role. Families are central to long-term care, but they are also an excuse that governments sometimes use for not contributing themselves to the needs of people who require social care. What we have been encouraging is for governments to steward systems that bring together families with different mechanisms of government support, whether that be in terms of providing training, respite care and broader community support like the older people’s associations that HelpAge encourages, or even in providing direct financial support to families to provide that care. So I think that families are important, but in the past have often been left unsupported and we need to think of better ways of moving forward for the 21st century.

Is that role sustainable for the future? What are the trends causing a rethink in how societies approach long-term care in old age?
It’s neither sustainable nor equitable because when we say family, it’s often code for women, and that means women who can’t be in the workforce and build their own financial security or it means girls who can’t go to school. We have to understand the impact that providing care has on family members and also ultimately on socioeconomic development. So there’s a real intersection
between gender issues and ageing issues. If we’re going to really address pressing gender concerns, we also need to consider the whole issue of providing care: who does that, and how they’re supported to do that. If we continue just to think of families as women, not only does it limit female possibilities in society, but we’re also missing out on the possibility of creating new economies.

Personally, I think we can create a care economy that’s actually good for older people, good for families, and good for governments. Another point is that we now have better technology, very simple things that can help older people get where they want to go or connect with other family members. For example, my four-year-old son knows his grandma largely through video conferencing. New technology can also enable families to have much better access to information so they know the issues they’re dealing with. For example, if they’re dealing with a case of dementia, some of the symptoms can be difficult to deal with, and just accessing the experiences of others and learning some practical ideas on how to manage those things can really ease the burden on caregivers. I think that side of technology is very important. I also believe that initiatives like older people’s associations create a very different model of how we can draw on social resources to help fill the gap.

Many people argue that we need stronger systems of home- and community-based care. What do you think are the drivers for expanding such services in the future? How would you hope to see
the role of communities, governments and the private sector evolve?
We’ve tried to emphasise that long-term care is not a question of government or family. There are all sorts of other people who already contribute and I think that the community is in between the two and also very important, but we can’t expect communities to participate without support and guidance. So what we need is clear leadership to capitalise support for those sorts of initiatives, as well as more practical support in terms of resourcing, financing, information and other things that can help make care systems successful.

Many governments seem fearful about the implications of population ageing. What are the challenges and opportunities for building political will for long-term care systems in Asia? Are you
hopeful?
Yes, I am hopeful. But I think we tend to start in the wrong place. One thing that seems to get political attention is a good scare, creating the fear that a tsunami of older people is going to make governments go broke. It’s a good way of getting political attention, but unfortunately if we do that, it’s very hard to transform the discourse into one where governments are looking at ageing as a more of an opportunity than as a threat. I think what we need to do is convince governments through appropriate investment. Ageing is a natural trend that they need to adapt to. The countries that adapt the quickest will actually have a competitive advantage over those that don’t. Adapting to a positive perspective of ageing can strengthen socioeconomic development. It’s not about old versus young and we’ve got a choice of investing in either young people or old people. It’s actually trying to create a cohesive and equitable society for all, and in doing that they’ll create societies which thrive and where socioeconomic development occurs rapidly.

To repeat, if we start by scaring people about ageing, it’s hard to then change the dialogue. We are trying, and I get a lot of positive feedback from governments, particularly in Asia. But I think many people still hold an outdated view of ageing – that it’s a problem and that we need to take action to minimise the problem rather than seeing it as an opportunity that we need to invest in to maximise the opportunity.