Together on the front line against diabetes

Together on the front line against diabetes 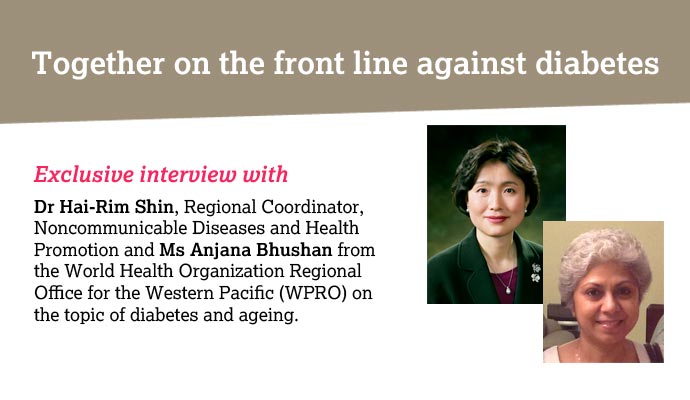 We are privileged to have an interview with Dr Hai-Rim Shin, Regional Coordinator, Noncommunicable Diseases and Health Promotion and Ms Anjana Bhushan from the World Health Organization Regional Office for the Western Pacific (WPRO) on the topic of diabetes and ageing.

Why is Diabetes a major concern in the Western Pacific Region?

Globally, it is estimated that 422 million adults aged 18 and above were living with diabetes in 2014. This is a significant increase from 1980 when the number of people living with diabetes was 108 million. Almost a third of this number (131 million) comes from the WHO Western Pacific Region.

With Asia/Pacific being home of a third of people living with Diabetes, what is the most urgent step for government and individuals?

Governments should continue to commit to addressing diabetes as a priority in national noncommunicable disease (NCD) responses in terms of legislation, regulation, financing, service delivery and surveillance. Diabetes management (which includes diagnosis, health education, counselling, provision of medications, screening and treatment of complications and follow-up) should be part of the national NCD response and incorporated into essential services included in universal health coverage.

In terms of prevention, individuals should work towards maintaining a healthy body weight, eating a balanced diet of fresh and whole foods, engaging in regular physical activity and reducing exposure to tobacco. These steps can prevent the onset of diabetes or reduce its complications.

The region is an ‘Ageing Society’, what are  appropriate  responses to NCDs?

The ageing of the population is both a success story and a challenge. It is a success because people now live longer than ever before, which is testimony to the significant progress made in preventing diseases and promoting health. It presents challenges because more resources may need to be spent on health and welfare. But if the process is managed properly, older people will continue to be a vital and valuable resource.

Notably, the window of time for action is short. The modern world is ageing at an unprecedented rate. The proportion of the population over 60 is growing faster than any other age group. The pace is expected to be especially rapid in low and middle income countries. These countries will have much less time to develop appropriate policies and actions than those where population ageing has occurred more slowly.

Noncommunicable diseases account for the largest share of ill-health and death among older people, who comprise a large share of those with NCDs. WHO advocates a life-course approach to healthy ageing. Good health in older age depends largely on choices made earlier in life. WHO supports policies and actions that minimize exposure to the risk factors for ill-health at all ages, including in later life.

The specific health needs and circumstances of older people need to be taken into account, with the explicit aim of adding good health to years of life. Early detection, prevention and management of functional and cognitive decline and frailty are particularly relevant.

Ensuring age-friendly environments can empower older people to maintain their health and wellbeing. Depending on the policies and actions in place, the economic, physical, political and social environment can enable older people to maintain their functional independence, health and wellbeing. Fostering supportive environments requires collaboration across sectors, including health transport, housing, social security and finance.

What is the economic and social implication on NCD?

Diabetes and its complications bring about substantial economic loss to people with diabetes and their families, and to health systems and national economies through direct medical costs and loss of work and wages. The direct annual cost of diabetes to the world is more than US$ 827 billion. From 2003 to 2013, the total global health-care spending on diabetes more than tripled due to the significant increase in the number of people with diabetes.

What can civil society do to tackle this issue?

Civil society is an important stakeholder in the fight against diabetes. They can raise awareness about the public health burden caused by diabetes and advocate for policy development, allocation of resources and behaviour change to name a few.