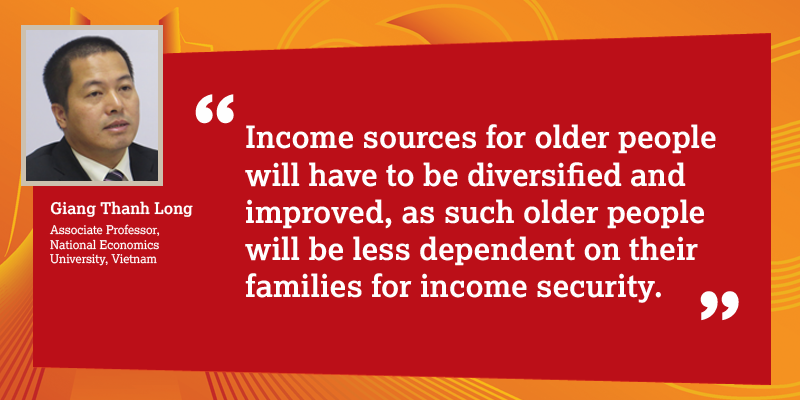 How would you describe the historical relationship between older people and their families, especially as concerns ensuring income security and material wellbeing?
As the majority of older people, especially in developing Asia, are not covered by any social security system and their own income depends on natural disaster-prone agricultural activities, they rely on the support of their families, particularly their children. Statistics in a number of Asian countries show that about 60 per cent of older people’s income comes from their own work and their children’s support.

In regard to wellbeing, families are traditionally a source of mutual support – both physically and mentally – between older people and their children and (great) grandchildren. Such support is also meaningful in coping with income and health risks for older people.

How do you see these past dynamics of income security evolving in the future, with demographic change? Can older people continue to rely on the family for income security?
As fertility rates have been declining all over Asia and living arrangements between generations have been changing, the proportion of older people living in multi-generational households has reduced, while the proportion of those living alone, living with a spouse, and living in skip-generation families has increased. This means that direct risk-sharing patterns between older people and their families have been reduced. It does not mean, however, that older people do not have the mutual support of their families. Statistics show that many older people still have their children living nearby – in the same village or commune – and mutual material support (cash and/or in-kind) as well as emotional support, such as by phone, letter and email, is still strong.

Along with reforms in social security systems in many countries, I think that income sources for older people will have to be diversified and improved, and as such older people will be less dependent on their families for income security.

What can be done to ensure that older people will not be over-reliant on the family as household situations change?
For this, we should distinguish between older people today and the older people tomorrow – the current younger generations. For the former, as many of them are not covered by a social security system, they must rely on income support from their families. To reduce this dependency, the government should play a greater role in providing partial or full income support to its current older population via cash transfer programmes. Various countries in the developing world have provided persuasive evidence on the positive impacts of programmes on poverty reduction, healthcare services, and providing more independence to older people.

For the latter, along with their own preparations to secure a better income, the government should provide adequate and accessible education, health and vocational training services. As long as these younger generations have sufficient income along with additional savings, they will not need to rely on either their families or the government.

How would you describe the role of the community in strengthening income security in old age in the future? How can communities contribute to improving older people’s lives and their livelihoods?
Communities always play a crucial role in providing income sources and health and social care for older people. This is particularly true for older people living in poor settings. Together, older people and their communities can mobilise sufficient resources for maintaining and developing their livelihoods. They also provide mutual support – material, physical, and mental – to each other. Inter-generational self-help clubs (ISHCs), which were initiated by HelpAge International, are an excellent example of such a community role.

What is the role of governments in expanding pension coverage, especially for lower- and middle-income countries in Asia, as families change?
As mentioned above, due to the low coverage of pensions and social security benefits and a heavy reliance on family support, older people are at risk of low and unstable income. In such a situation, governments obviously play an important role in providing income security – partially or fully – for older people. They can provide cash transfers to poor and vulnerable older people, and they can also support those who can generate income by various productive activities. Ensuring non-discrimination against older people working would help them to secure income by themselves.