On 16 March, 2017, a forum to raise the awareness among parliamentarians on Myanmar’s National Universal Social Pension Scheme was held in Pyidaungsu Hluttaw. The Government of Myanmar will be funding and rolling out the first Universal National Social Pension Scheme in FY2017-18, starting this June. The Ministry of Social Welfare, Relief and Resettlement will provide a monthly cash transfer of K10,000 to all older people aged 90 and above in the country. 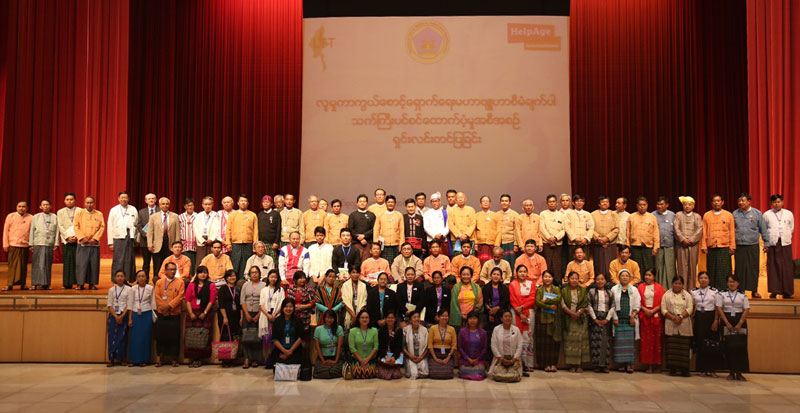 Approximately 200 parliamentarians, representatives from various Ministries, LIFT (Livelihoods and Food Security Trust Fund), HelpAge International, Myanmar Ageing Network, Older People Federation and other civil society organisations participated in the forum to discuss the roles of parliamentarians and the implementation of the scheme.

The Union Minister, H.E. Dr. Win Myat Aye, opened up with a speech about the objectives of the social pension scheme, highlighting the importance of active ageing and dignity for older people in Myanmar. With the support of LIFT and HelpAge International, the Ministry can commence with 2 of the 8 flagship programmes in the National Social Protection Strategy Plan – the Maternal and Child Cash Transfer programme in Chin State, as well as the social pension scheme. He called for the advice from parliamentarians on rolling out the social pension scheme effectively and the formation of social protection sub-committees at a village level.

Dr. San San Aye, Acting Director General of the Department of Social Welfare, presented the rationale behind a universal social pension scheme in Myanmar, underlining the significant difference that a monthly transfer of K10,000 can make to the lives of poor older people. A video of a pilot social pension cash transfer programme from June 2015 to May 2016 was also shown to the participants to enhance their understanding of the implementation and the current issues. 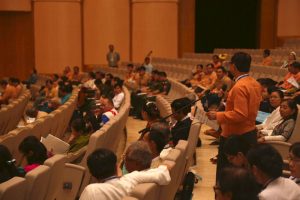 Parliamentarians from both Amyotha Hluttaw (upper house) and Pyithu Hluttaw (lower house) discussed and asked questions about eligibility, inclusion and exclusion errors, and the formation of the social protection sub-committees. There were questions about formal documentation to verify the eligibility of older people, and accountability issues on how to ensure that the cash is delivered to the right people. Parliamentarians also gave comments about the formation of members to include in the sub-committees.

One of the ways to ensure that cash delivery is made to the right people is to raise the awareness among the community through distributing cartoons about the pension (see Photo 3). One parliamentarian also commented on the effectiveness of Older People Self-Help Groups to be involved in the sub-committee.

The Union Minister called for widespread awareness raising of the social pension scheme in communities. The forum ended with fruitful discussions and ideas from parliamentarians, which are very important inputs to enhance the effectiveness of the implementation of the scheme.