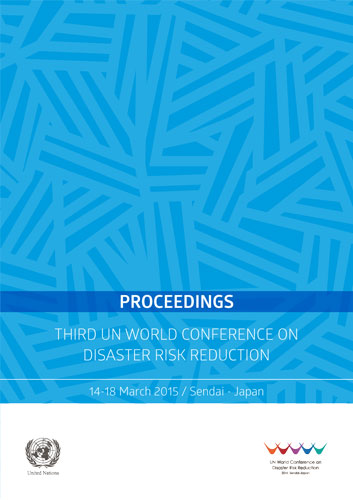 The Third United Nations World Conference on Disaster Risk Reduction was a seminal event in the calendar of the post-2015 development agenda. It was held on 14-18 March 2015 in Sendai, Japan.

This World Conference took place amidst growing concern about the sustainability of development efforts in the context of increasing vulnerability and exposure to disaster events. It has resulted in a 15-year plan of action with seven global targets and four priorities for action: the “Sendai Framework for Disaster Risk Reduction 2015-2030”.

The Sendai Framework can have a revolutionary impact on sustainable development because of its far-reaching inclusive nature. The Sendai Framework builds on the solid achievements of the last decade of implementing the “Hyogo Framework for Action 2005-2015: Building the Resilience of Nations and Communities to Disasters” and zooms in on the need to switch emphasis from disaster management to managing the risks. The outcome document also makes clear that far greater attention must be paid to social and health-related issues in the implementation.

This document will also be translated and made available soon in the other five UN languages.