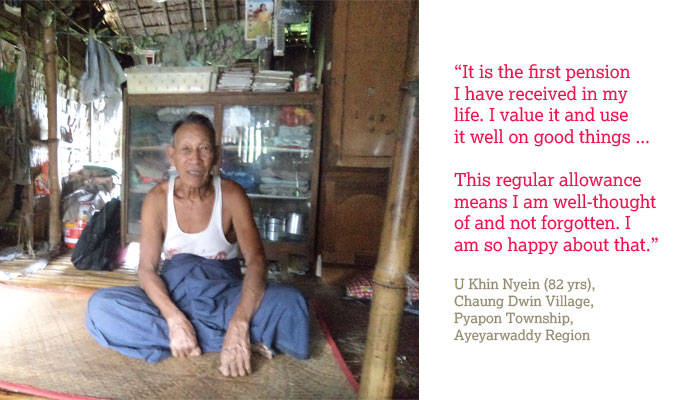 Khin Nyein, 82, who suffers from hypertension, is a father of six children. He and his 73-year-old wife live in Chaung Dwin Village, Pyapon Township of the Ayeyarwaddy Region. They have to stay in one child’s  house, then move to another’s in the same village, so as not to burden any one for too long. After a recent visit to a clinic in Pyapon, U Khin Nyein is now taking medicine.

From time to time, his sons and daughters give him money, which he spends mostly on food. Every morning, he buys coffee which costs 200 Kyats (0.15USD) and sometimes he spends 400 Kyats (0.31USD) on bread as it is cheap. However, since June 2015, he has been receiving a regular social pension payment from the government.

With his first payment (10,000 Kyats a month) he was able to buy a better choice of food, including milk and some snacks. He gave some money to his grandchildren and also donated to the temple for the monks’ food.

His wife has also recently enrolled in a cash transfer program so she will shortly receive an allowance, which will enable her family to have a small but valuable addition to their income.

U Khin Nyein said “The money is not a very big amount – only about a tenth of my monthly needs—but it is the first pension I have received in my life. I value it and use it well on good things like donations to the temple and for my health as well. This regular allowance means I am well-thought of and not forgotten. I am so happy about that.