Boxing Day is normally a day to put my feet up and give tired legs and an overworked body some rest.

It is also a time to review the year that has gone by and mentally prepare for the new year ahead.

On the last day of work before the holidays, we had promised ourselves that we would switch off from work mode, hang a “Do not disturb” sign outside the door and enjoy the holidays.

We shook hands on that promise, wished each other happy holidays and agreed to meet again only in the New Year. 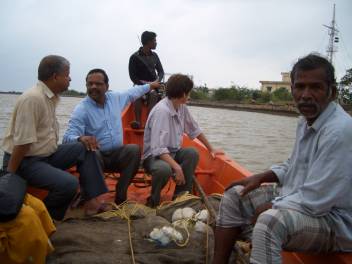 Initial footage took my breath away

With a steaming cup of my favourite Indian tea, I switched on the TV. I was mainly interested in listening to plans for the end of year events to say goodbye to 2004 and to welcome the New Year.

I was totally unprepared for what was unfolding on the television screen.

A major Tsunami caused by a massive earthquake had struck eight countries in the region. The initial footage of the sea smashing into homes and hotels in Thailand took my breath away. I had never seen anything like it before, nor was “tsunami” a familiar term and I have been around a fair bit on this earth.

By the evening of 26 December, it became clear that the devastating tsunami had swept over coastal Indonesia, Thailand, India and Sri Lanka killing thousands of people and destroying houses, cars, fishing boats and even trains. The impact was chilling.

People were crying out for help

With the “Do not disturb” sign torn off, we got on the phone to each other. Eduardo, our Regional Director in East Asia Pacific called an emergency meeting. We took stock of the situation, contacted our partners in India, Sri Lanka and Indonesia and took the decision to respond.
We had no experience in the regional office or in the network of responding to a disaster of this magnitude. But we knew people were suffering, affected nations were crying out for help and that our partners faced a daunting task and needed support.

Beneficiaries showing their coupons to receive relief package by HelpAge, at distribution centre in Cuddalore, IndiaWe jumped on the plane and joined our partners in India, Sri Lanka and Indonesia.

All along the coast, we saw death and destruction, families wailing for the dead and running whenever a body washed ashore, in the hope that it was one of their loved ones.

We saw posters and notices of missing people pasted on trees, lamp posts and buses. We saw the dead being buried in mass graves.

The media coverage of the Indian Ocean Tsunami was objective, sustained and realtime. I think this was the first time the world was seeing a tragedy in such vivid detail. The outpouring of support generated large amounts of resources for governments and agencies to deliver aid.

HelpAge International also received a significant amount, thanks to which a major response could be delivered in India, Sri Lanka and Indonesia. It was a challenge and the main reasons we were successful in our mission were team work and learning on the job.

The Indian Ocean Tsunami response was a major learning curve for all of us, including our partners. Above all, it taught us that being prepared is the key to responding in a timely manner.

In the past ten years, the HelpAge East Asia Pacific office has made emergency response a key topic of our regional conferences to raise awareness throughout our network of the need to be prepared and develop capacity to respond.

Trainings and workshops have been arranged to build capacity of partner agencies and HelpAge offices in the region. We have successfully promoted the active participation of older people in emergency responses in the Philippines, a model which is being promoted through the region.

We are also promoting a robust Disaster Risk Reduction (DRR) programme which focuses on the key role older people can play through older people’s associations in Vietnam, Myanmar, Thailand and the Philippines. Dr Wesum from the East Asia Pacific Regional Office took part in the relief distribution in Sri Lanka.

In recent disasters, the preparedness of communities through DRR activities has saved many lives and assets. Regional and national DRR trainings have been organised for our network and these activities will be scaled up in the future.

TsunamiReady is the new terminology for preparedness for coastal communities. The Indian Ocean Tsunami at that time seemed like a one off. Many people I met in these countries were quite confident that another Tsunami would not happen in their lifetime as Tsunamis of this scale are rare.

Big disasters are the new normal

Yet we have had the Great Eastern Earthquake and Tsunami in Japan, typhoons Ketsana, Bopha, Haiyan and Hagiput in the Philippines, Cyclone Nargis in Myanmar, flooding in Thailand, Cambodia and Vietnam to name only some of the major water related disasters.

In addition, there have been major earthquakes in India, Pakistan, China, Indonesia, Philippines, Myanmar and New Zealand, forest fires in Australia and Indonesia and volcanic eruptions in Indonesia and the Philippines. It is no longer a one off. It is the new normal.

HelpAge’s regional office has come a long way in the past ten years. The Indian Ocean Tsunami seems very far back as so many other disasters have happened since.

Every response starts with a challenge over capacity and funds, but we have always responded to the needs of people first. Through this process we have learnt from older people and communities that they are strong and resilient and that they must be involved to make a programme successful.

Disasters bring people closer and we have built up very strong relationships with our partners and improved our overall capacity to respond to future disasters in a timely manner.

Another key aspect of HelpAge’s emergency responses has been the importance of transitioning to longer term development programmes. The legacies in India, Sri Lanka and Indonesia and the large programme in Myanmar were all built on the back of emergency responses.

Our partner in the Philippines, COSE, has also graduated into a key national emergency response agency as a result of the team work with them over the years.

While no one can predict the time and scale of a disaster and its impact on people, HelpAge today is in a much stronger position technically to mount a response.

The “Do not disturb” sign is banned in the office and Boxing Day has never been the same again.